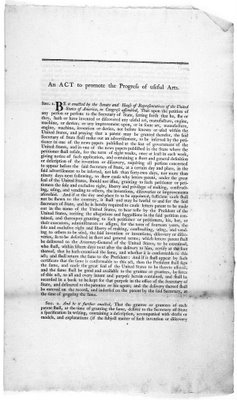 When the United States enacted their first Patent Act in 1790, they made the issuance a matter of the highest importance. There was no patent office. The president himself (George Washington) with assistance of a committee of three (Thomas Jefferson, Henry Knox and the Attorney General Edmund Randolph) met on the last Saturday of every month to review each and every patent application. They established strict rules for obtaining a patent [1].

Although that resulted in too few patents and was soon changed to allow patents without any substantial patent review, this first system of a Patent Review Board consisting of politicians rather than technicians, was never repeated again in any patent system after 1790.

This may soon end. If the European Parliament gets its way, review of patent applications must be a job done under “democratic” supervision. On October 12, the European parliament agreed by a large majority to the European Commission’s plan of going forward with talks on patent reform in Europe, but with a number of amendments to the current plan aimed at ensuring “democratic control” of the process. The vote of the EP was on the Commission’s plan to support the EPLA (see earlier IPEG posts), so the question whether the European Community should “accede to” the European Patent Litigation Agreement (EPLA), which would mean –among other things – the setting up of a European patent court.

Do we want politicians to rule on novelty and inventive step? Hell, no! This very idea signals a worrisome trend in the way politicians look upon intellectual property. Where European innovation falls significantly behind the US and Asia and China surpasses Germany as the 5th world largest supplier of patent applications one would expect European politicians to focus on enhancing innovation rather than beset us with ludicrous ideas about “democratic” review of how patents are being granted by the EPO. European Parliament’s engrossment with so called “undesirable patents” coming out of the EPO (an allegation grossly exaggerated, see memo Severin de Wit to the Dutch Ministry of Economic Affairs of April 15, 2005) prevents a fact-based discussion on how to improve the patent system. It misguidedly focuses on issues that are irrelevant and do not at all help us making the patent system a more effective instrument to further innovation.

The idea of “democratic supervision” is both without merit, incomprehensible and legally nonsensical. Without merit because the question whether a patent has been rightfully granted by the European Patent Office is ultimately for the judiciary to decide, not the lawmakers, nor the executive. Incomprehensible, because there are much more pressing issues to be resolved by European Parliament in making the patent system more apt to the 21st century. Last but not least the whole idea is legally nonsense.

Patents are being granted by the European Patent Office, which is the executive arm of the European Patent Organization, an intergovernmental body set up under the European Patent Convention (“EPC”), whose members are the EPC’s 31 contracting states. Established by the EPC (or “Convention on the Grant of European Patents”), signed in Munich 1973, the EPO is the outcome of the European countries’ collective political determination to establish a uniform patent system in Europe. The activities of the EPO are supervised by the Organization’s Administrative Council, composed of delegates from the contracting states. Oversight is being conducted by this Council. Any member of the EU Parliament can lobby its own national members of parliament to take positions and come up with new ideas in the EPO’s Administrative Council.

So what is in the European Parliament members mind when they talk about “democratic” supervision? Do they refer to the concern that EPLA judges would be mostly recruited from the EPO’s Appeal Boards? That is a legitimate concern, but what has that to do with “democratic” review? Or do MEPs mean to say that the current ideas about EPLA and the proposed system of judicial review of EPO patents should not be done by contracting states individually (so by an international agreement between European states), rather than by means of EU legislation like the Community Patent? If that’s the case, again it is a point to make, but what does that have to do with democratizing the grant of patents?

Alternatively, is it that MEPs want to have a say what type of inventions qualify as a “patent” (vide the discussion on software patents)? Lets hope this is not what MEPs really want, because if they do, we better abandon the whole patent system altogether. Why would anyone be attracted by the idea that 732 MEPs vote whether an invention is novel and inventive, so worthy of a European patent?