Intellectual property assets (IP Assets), primarily patents and software, have been the driving force behind high tech companies, but often times investors fail to understand their unique value as strategic business assets.  Investors tend to focus on the defensive value of IP Assets, as it relates to protecting the company’s own products, but that is a very narrow point of view that entirely misses the full value of these assets for investors.  This problem gets exacerbated as more and more startups turn to leverage their IP Assets for funding, as we are often seeing in our Silicon-Valley based IP valuation practice.

In order to improve the IP valuation understanding and communications between startups and their investors, we have developed the Startup IP Valuation Model, which is presented in Chart 1 below.  This model establishes four types of investor/investment combinations, and identifies the main source of value that IP Assets can bring investors in each of these situations.  IP value is contextual, as it largely depends on the IP holders and the uses they find for the IP Assets.  Our model highlights the association that the investment type creates with the asset, as well as the types of investors and what sets of capabilities they have to leverage the IP Assets in conjunction with other assets that they hold. 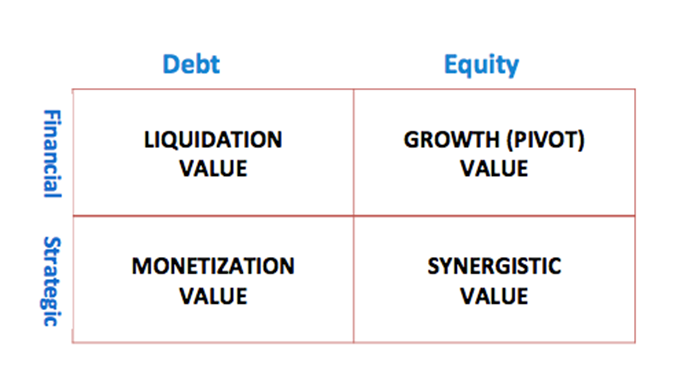 The Startup IP Valuation model is best illustrated through an example, which is taken from one of our client engagements (all identifying details have been modified).  Our client, which we will refer to as CoolData, was looking to raise a large Series A round of funding of $25 million, which it was planning to invest in its data center cooling technology that required massive upfront capital investment.  CoolData created some IP Assets that it was trying to leverage for fundraising, including: a patent portfolio of about 20 US patents, mostly issued and some pending applications, as well as a set of fully developed data center management software tools that have been in use by several data centers.  We turn next to apply the IP Valuation Model to this example.

CoolData could approach a financial institution that engages in early stage funding, such as a venture capital (VC) fund or banks that specialize in venture lending. The investment by such institutions is financial in nature, and can take on one of two forms: Equity (investment for stock) or Debt (collateralized loan).  The type of investment is critical to the association between the investor and the company’s underlying assets, which, in turn, determines what type of value they can generate from the IP Assets.

Equity investments are done in return for shares (usually preferred shares) of ownership in the company. Based on data from the National Venture Capital Association (NVCA) and PwC MoneyTree report, VC investment in the US has grown from $24 billion in 2010 to $59 billion in 2015. As shareholders, VC funds and other financial investors are participating in the growth of the company: as the company’s assets grow, so does the value of their share in those assets.  In that regard, they are less concerned with the immediate liquidation potential of the IP Assets, and more concerned with the IP Assets’ potential to serve as a platform for innovation and growth, not only for the company’s current products, but for future products and markets as well.  In our Startup IP Valuation Model, this is referred to as the Growth (Pivot) Value. The word “pivot” is used in the startup world to represent a shift in business model.  It is not uncommon for a startup to fail with the first iteration of its product, or it could be targeting the wrong market.  While IP Assets should provide exclusionary rights as those relate to the current product, these assets should be created in a way that covers a wider range of ideas, encompassing future product iterations regardless of the market.  That gives the company the ability to “pivot” into other products or markets while leveraging on the same IP foundation.  In the case of CoolData, the Pivot Value lies largely in the patents, not so much in the software.  Code is particular to one implementation and deteriorates in value quickly. Patents, on the other hand, cover more conceptual methods and processes; with well-written claims and some vision, those could lend themselves to additional implementations so they could serve the company in entering new markets, or could be licensed to others.

Venture Debt is more difficult to obtain, as only a handful of banks or funds offer this type of funding to startups that are looking to use IP Assets as a collateral.  Some of the financial institutions that offer Venture Debt lending include Silicon Valley Bank and Fortress Investment Group.  Venture Debt is a senior secured loan that has liquidity preference above all other debt or equity holders.  The note will most likely be secured by 100% of the assets of the business, and the lender will typically lend 25%-75% of the fair market value of assets.  Lenders (debt holders) are mostly concerned with operating cash flows, and the ability of the company to pay back the loan and accrued interest.  The company’s IP Assets serve as a collateral securing the loan; should the company default on its loan payments, the debt holders can take over the assets and liquidate them.  In our Startup IP Valuation Model, this is referred to as the Liquidation Value.  Debt holders don’t participate in the growth of the company’s assets, as their return is fixed in nature (pre-determined interest rate).  Not all IP assets have a strong liquidation value; in the case of CoolData, it was actually their software assets that carried more liquidation value than the patent assets.  The patents were forward looking, not covering technology that is widely deployed in the market yet, a factor that determines a lot of the current market value of patents.  The software, on the other hand, has already been used and could have been easily licensed to additional data centers, and therefore much of the Liquidation Value in that particular case came from the software.

It should be mentioned that one hybrid financial instrument that is common to early stage investments is the Convertible Note, which starts out as Debt and could convert into Equity. Convertible Notes are usually issued to avoid the need to assign a valuation to the company’s common stock at a very early stage (Seed or Angel stage) with the creation of a bridge loan that can be converted to equity at the price of the next large round of funding.  Convertible notes are popular with Angel and other early stage investors, not so much for $25 million Series A investments as sought by CoolData; nevertheless, for purposes of our model, we are treating them as Equity instruments, as most of these end up converting into equity.

Equity investment by corporate venture arms is carried out using investment models that are very similar to VC investments, with the main exception being that the money invested is that of the corporation itself.  Another key difference is that the corporate venture group has ties to the corporation’s complementary business assets (manufacturing, marketing, customers, infrastructure), which could provide for synergies with the IP Assets of the startups in which they invest.  In CoolData’s case, it would make a lot of sense to approach corporate venture arms of companies that are either heavy users of data centers and could benefit from the cooling technology (Google) or ones that make networking equipment for data centers (Cisco).  In our Startup IP Valuation Model, this is referred to as the Synergistic Value, which represents the value-add that the a corporate investor brings, as opposed to a financial investor, which cannot provide that type of value.

Corporate lending is less frequent than corporate equity investment, but could be structured as part of a proof-of-concept (PoC) collaboration, as an example, which is a common way for large corporations to participate in the development of startup products.  Those types of agreements could include a line of credit or some other type of lending, as well as access to equipment and engineering resources.  IP Assets are often time the only assets that a startup could have to secure the corporate loan.  Should CoolData default on its loan and the corporate lender were to take over its IP Assets, the corporate lender could generate more than just the liquidation value that the financial lender could generate.  This is due to the fact that the corporate lender has IP Assets of its own, such as patents, that could be aggregated with CoolData’s own IP Assets and monetized (through licensing, as an example).  In our Startup IP Valuation Model, this is referred to as the Monetization Value.  Even if the corporate lender taking control of the collateralized asset does not find much synergistic value with its own products or resources, it can still monetize them better than the financial lender, which at best can sell them in a liquidation sale.

CoolData ended up raising the requested $25 million using a combination of debt and equity investments from private equity and other financial investors.  Differentiating between the Liquidity Value (which resided largely in the software assets) and the Growth Value (as reflected in the patent) helped communicate the right value premise to each type of investor.  The model has worked really well in many other instances, as it is based on the contextual nature of IP valuation and applies it across four common combinations of investors and investments.  As IP Assets fill an increasingly larger role in startup funding, and as more types of investors and financial instrument show up in the market, the understanding of IP valuation becomes more important than ever before for successful investment.