Unfortunately there has been wide spread confusion about what actually happened with the IKEA trademark case in Indonesia against Ikea, the famous furniture company from Sweden. Recently the Indonesian Supreme Court rendered a judgment, confirming a lower Commercial Court finding invalidating two trademarks due to non-use. Various commentators, blogs, newspapers and other public sources, believed that IKEA lost its right to use its famous mark in Indonesia. It caused many to warn against the dangers for companies doing business in Indonesia, suggesting that copy cat and brand grabbers would prevent legitimate companies to use their IP rights in Indonesia which copycat or brand grabbers would then find the Courts on their side in “stealing” the foreign brands. Even the New York Times on February 5, 2016 published a news article “Furniture Giant IKEA Loses Its Trademark in Indonesia” suggesting that IKEA lost its rights to its brand all together: 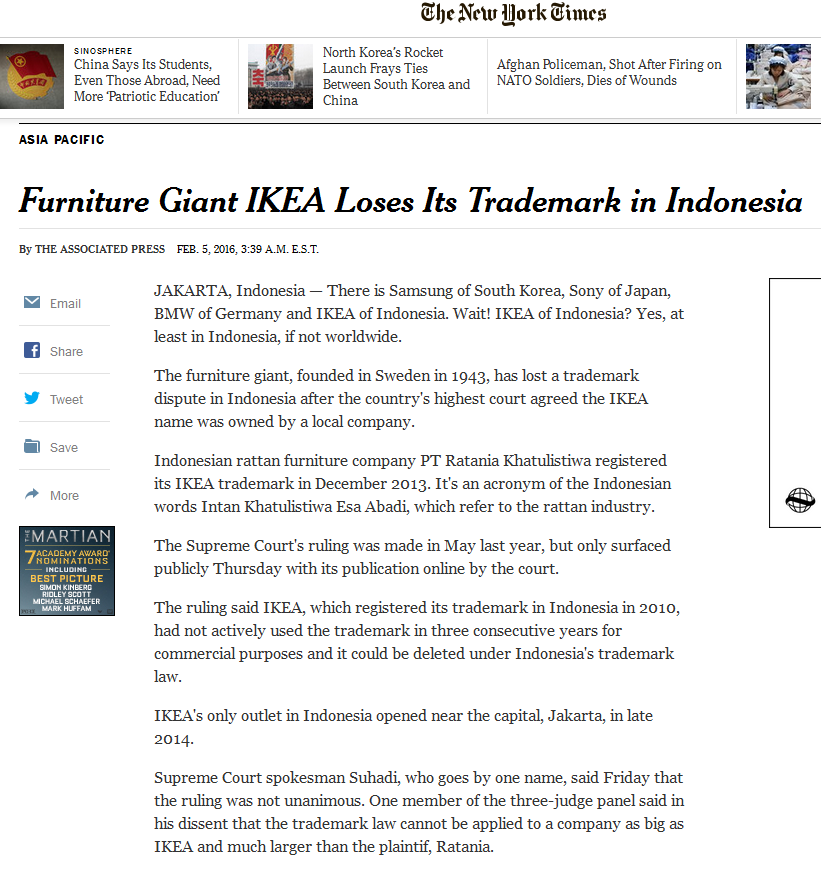 Soon, the news spread that IKEA “lost its trademark”, suggesting that the famous mark would have no trademark right anymore and would therefor be unprotected by any Intellectual Property Rights for its brand.

Guesswork as what the decision was all about was prominent, for a great deal due to the fact that neither the first instance decision by the Jakarta Commercial Court, nor the decision of the Supreme Court were publicly available or any blogger commentator or journalist. The impression soon spread that the situation in Indonesia was a serious setback for Ikea’s business franchisees and consumers. It seemed as if there was a claim by the company seeking to invalidate the IKEA marks for non-use to also stop the Swedish company from using its IKEA mark all together. Not true.

Ikea today felt the urge to stop the confusion about the court case and the consequences of it losing that case and published this advertisement in KOMPAS, a well known news outlet in Indonesia: 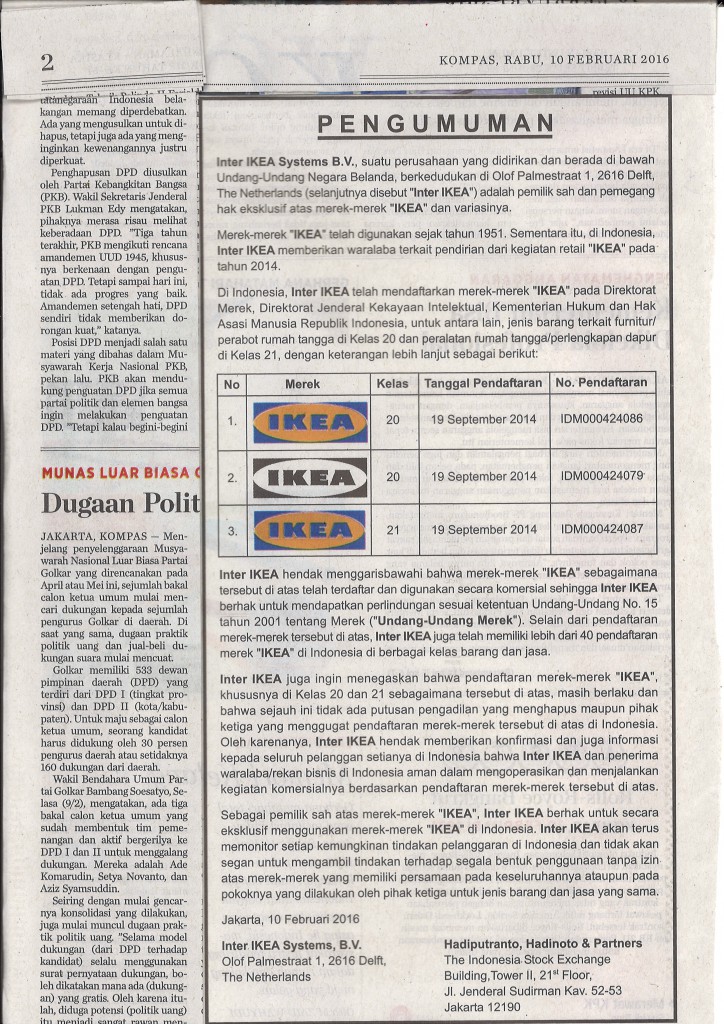 The English translation can be found here.

Basically the case is that YES Ikea lost a trademark case, but NO they did not lose their right to the IKEA trademark all together. The case at hand only relates to a (small) number of registrations for which Ikea’s opponent – an Indonesian rattan company – claimed that those registrations were never used within the statutory period of 3 years after registration (required by the Indonesian Trademark Law of 2001). Ikea filed a lot of trademakr registrations in Indonesia since they started commercially using its famous mark in 1951.

In short: a nuisance for Ikea, but no panic, the famous IKEA is still owned by Ikea Systems B.V. (a company holding the trademark rights)!