Altobridge was a privately held Irish technology company that developed wireless network solutions. Its products were designed to enable telecoms operators to deliver low-cost GSM and 3G wireless broadband to unconnected rural and remote communities. The company was founded in Ireland in 2002 by Mike Fitzgerald, Guy Waugh and Bart Kane. Their goal was to use research and development to remove technical and commercial barriers that often denied remote communities from affordable mobile voice and mobile internet connectivity. Their ‘lite-site’ solution was designed to be easily transportable and easily assembled on-site. The site installation and commissioning process took two or less days to complete. This ‘lite-site’ solution served subscriber communities of up to 100 to 1,500 people. In the early years, the company developed and commercially deployed the solutions behind the first commercial GSM service on board passenger aircraft, as well as the first commercial deployment of GSM connectivity on board deep-sea merchant maritime vessels. Altobridge even installed a Remote GSM Solution at Australia’s Antarctic station for its resident scientific team at ‘Casey’ on the continent’s Bailey Peninsula.

CEO, Mike Fitzgerald, had been a Head of Business Unit at Ericsson, working in Ireland, China and the USA. Guy Waugh, was the COO, having spent time at GEC Avionics, Ericsson, Microcellular Systems and InterWAVE. Richard Lord became CTO, having spent many years at Alcatel. Bart Kane was CFO at Altobridge with Jerry O’Sullivan taking over the CFO role in 2012. Dick Spring was Chairman of Altobridge. He was a member of the Irish Parliament (Dáil Éireann) from 1981 — 2002. Formerly leader of the Irish Labour Party, he served as Deputy Prime Minister in three Governments between 1982 and 1997. He also held several ministerial offices: Foreign Affairs, Justice, Energy and Environment.  Board members included David Summers from Advent International, Gunnulf Martenson a consultant at the World Bank and Damien Callaghan from Intel Capital.

Investments in the company

As a hi-tech start-up, Altobridge received frequent news coverage. In 2007, Altobridge announced that it had licensed its patent pending Local Connectivity Platform to Ericsson. This agreement enabled Ericsson to provide local switching across its GSM Base Station portfolio. This was a major change for Ericsson who were known to prefer developing all of their own functionality in house. In early 2010, Altobridge announced that it had bought ADC’s GSM Base Station and Switching Product Portfolio together with associated intellectual property. In September 2011, the World Economic Forum selected Altobridge as a 2012 technology pioneer. To be selected as a technology pioneer, a company must be involved in the development of a major technology and/or innovation and have the potential for long-term impact on business and society. Previous winners of this award included Google (2001) and Twitter (2010). In 2011 Altobridge won a Deloitte ‘Best Managed Company’ award plus a Wall Street Journal Innovation Award.

However, in 2014, Intel Capital and the IFC (subsidiary of the World Bank) who were the larger shareholders in the company, confronted with continuous losses in Altobridge, called in a receiver to recover loans provided to Altobridge. Jim Luby of McStay Luby chartered accountants was appointed receiver of Altobridge Ltd on 30 May 2014. This was a dramatic change from 2011 when the company had a turnover of $16.1 million and had raised US$19.8 million in investments from both Intel and the World Bank’s International Finance Corporation. It is difficult to say when exactly the company started to face serious business challenges. Clearly a few members of the company’s management realized that the company faced financial difficulties as far back as 2011. Forty five jobs were lost at Altobridge in Ireland when it ceased trading in June 2014. The company which had offices in Ireland, Malaysia, North America and China, employed a total of 130 staff internationally.

iDirect, an international satellite communications firm bought the company out of receivership. iDirect is owned by ST Engineering, an $11 billion Asian defense and engineering conglomerate. Altobridge assets were sold by the receiver for €4million to iDirect, with the majority of these funds being returned to Intel Capital and the IFC who had advanced monies under a secured loan arrangement. Interestingly, the company which acquired Altobridge, namely iDirect, was primarily interested in the intangible assets of the company, namely the patent portfolio and the software.

Entrepreneurship is not for the faint hearted. Some hi-tech start-up companies manage to grow their business successfully and get through the tough times while others unfortunately fail. Entrepreneurship is a constant roller coaster that most people aren’t willing to ride, and start-ups often need to change and adapt and fight through the bad times before making it to the next stage.

There are many companies like Altobridge out there, with an interesting technology, good people and significant investment, but which ultimately fail to gain a sustainable competitive advantage. Did Altobridge however miss a trick? We would argue that this is the case with Altobridge. We would furthermore argue that Altobridge (more importantly: it’s senior management)  failed to fully appreciate their patent portfolio, the potential value of these assets and the different models available to them to monetize such assets. Leveraging their patent portfolio may have helped Altobridge through their tough times. 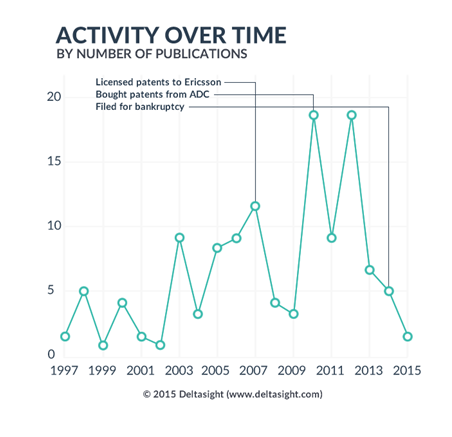 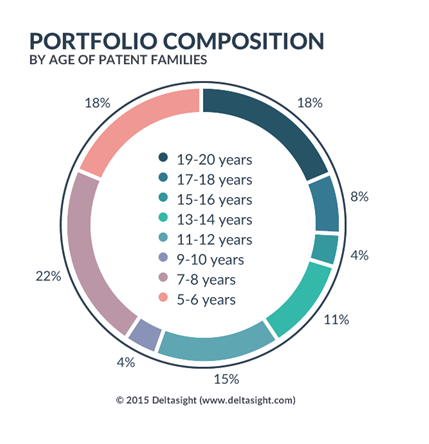 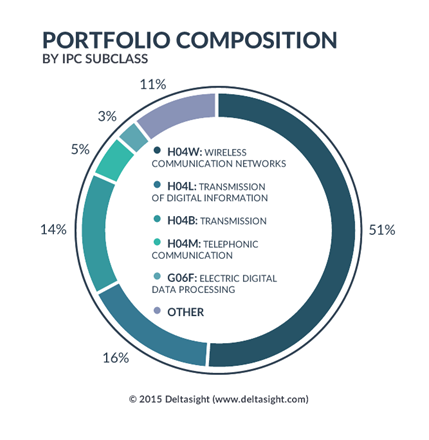 Another fact was timing. At the same time the Altobridge patent portfolio was valued the consultant advising the IP staff of their patent potential pointed out that at the same time, around mid 2011, Nortel Networks Corp., the defunct Canadian telecommunications giant, auctioned off its portfolio of six thousand patents and drew an astonishing winning bid of $4.5 billion from a group of companies that included both Apple Inc. and Microsoft Corp. Unfortunately management did not act upon the monetization advice and could not be convinced to do so, despite the right timing and market conditions, as well as the potential great value of the portfolio. 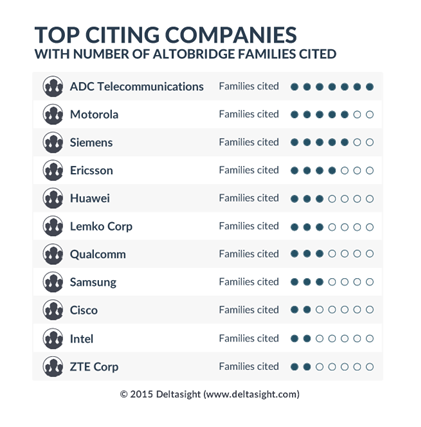 As this case study shows not only is it important to value the patent portfolio properly but more importantly timing and market conditions are equally important for management to act on a proper valuation of the patent portfolio when a start-up is facing financial difficulties in its ongoing business. The sad truth of the matter is that Altobridge’s case is most likely not an exemption rather a the rule in business practice that senior management fails to take action to truly appreciate the intangible assets of the company and act upon it, after careful considerations of market, timing and pricing conditions.

by IPEG consultant Donal O’Connell. For completeness sake: Donal was also involved in the valuation of Altobridge’s patent portfolio. Opinions expressed above are his personal views on the Altobridge case.
The figures used in this article originate from Deltasight. Deltasight’s mission is to utilize its data mining and analysis technologies to bring transparency to global innovation and technologies.
Add to Flipboard Magazine.